One glance at the news reveals the impact guns can have on society. Whether one believes guns are solely to blame or if there are wider causes for these tragedies, there is no denying that … 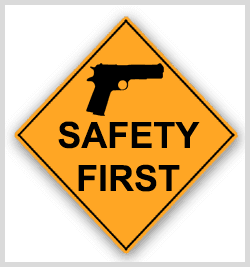 One glance at the news reveals the impact guns can have on society. Whether one believes guns are solely to blame or if there are wider causes for these tragedies, there is no denying that there is an issue to be addressed.

Some people, those who tend to be on the far left of the political spectrum, will argue that there is no need for people to have guns and will often advocate for a complete ban. They are certainly entitled to their opinion, but the reality of the current political climate indicates this type of move will not happen any time in the near future.

As a result, there is a need to find a more pragmatic approach to this issue, and one way is to up the ante on the education of gun safety to help identify issues early on and also engrain good practices into children who may become interested in owning a gun when they get older.

Children are going to play with guns

Many people like to blame violent video games or films for children becoming interested in violence and gunplay. While there is an argument to be made this fuels the fire, there are other reasons why children become interested guns, including the natural development of the child.

So instead of shaking our heads at war movies and bloody videogame, perhaps the better course of action would be to simply embrace this as something natural, using it instead as a teaching moment. This interest in violence can manifest itself negatively if left untouched and subjected to the whims of societal pressure, or it can be a valuable opportunity to instill values and teach about responsibility.

There is no one reason people resort to violence. However, there are some trends identified by both psychologists and social scientists. For example, psychologists Joseph Vandello and Jennifer Bosson have come up with the term “precarious manhood,” which refers to the delicate status of a man in society and the way violence helps to bolster this status within a person’s mind.

As mentioned earlier, some children will play with guns as a natural part of their development. But for some children, the reasons for engaging in these activities might be much different. By having meaningful conversations with children about why they are doing what they are doing, and by being honest about what their playtime activities represent in the real world, there is an opportunity to discover some potential issues before they manifest too strongly.

While many parents may try to simply steer their children away from these activities, this might not be the best approach. Denying a child a way of expressing his or herself can have consequences, so the better course of action may be to engage with the child and learn about what motivates them. From there, future problems can be discovered and addressed before they become something much larger.

One of the best ways to deal with a child’s interest in guns and violence is to teach. The Boy Scouts introduce gun use rather earlier, but they put a heavy emphasis on safety and best practices.

Taking your child to a shooting range and exposing them to the power of these devices while also teaching him (or her) about the risks and dangers can be a great way to instill a sense of responsibility and maturity towards firearms.

However, if you aren’t thrilled about the idea of your child firing a real gun, there are alternatives available that can simulate the experience in a safer way. For example, using the best air rifle you can find will make your child feel like they are shooting a real gun, but the risk is much lower. These devices use pressurized air and rubber pellets instead of gunpowder and bullets, making them a great way to introduce your child to firearms while keeping them safe.

All in all, one cannot ignore the reality that children become interested in guns and violence. And trying to suppress this interest or discipline it away can be detrimental to developing safe gun use. Instead, addressing the problem head on and finding safer alternatives can help you turn this risky behavior into healthy growth and development for your child.