An Indonesian teenager has survived 49 days adrift at sea in a fishing hut before being rescued and returned home safely.  Aldi Novel Adilang, 19, is a lamp keeper for a floating fish trap called …

An Indonesian teenager has survived 49 days adrift at sea in a fishing hut before being rescued and returned home safely.

Aldi Novel Adilang, 19, is a lamp keeper for a floating fish trap called a rompong, which was located 77 miles off the coast of Indonesia. His job involves being responsible for changing the lights used to attract fish when they die out.

The trap, which is shaped like a hut, floats in the middle of the sea but is anchored to the seabed by ropes. Aldi, from the Indonesian Island of Sulawesi, works on the hut in the middle of the sea in total solitude. Every week, a colleague brings him fresh supplies of food, water, and fuel to run the gas stove and generator he has on board. In exchange, the colleague collects the fish that Aldi has gathered and stored in the floating hut.

Tragically, on one particularly stormy night, strong winds snapped the moorings of the rompong and Aldi drifted out to see whilst he slept. He woke to find himself adrift at sea with sharks circling his floating fish trap, turned life vessel.

With no engine or paddles, he was left at the mercy of the tides and survived the 1600 mile journey by catching fish, burning wood from his hut to cook them and drinking seawater through his clothes to minimize the salt intake.

While he thought sipping seawater through fabric probably wouldn’t really lower the salt content that much, he had no choice. Luckily this nifty bit of improvising paid off and he managed to survive.

He must have incredibly strong faith and mental strength because each time he saw a ship, he waved frantically, but over 10 vessels passed by without spotting him. How heartbreaking that must have been.

He was finally picked up and rescued by a by a ship sailing under a Panama flag that picked him up in the waters near Guam and then dropped him off in Japan.  After failing to attract the attention of its crew, Aldi sent an emergency radio signal which, fortunately, was picked up by the ship’s radio. 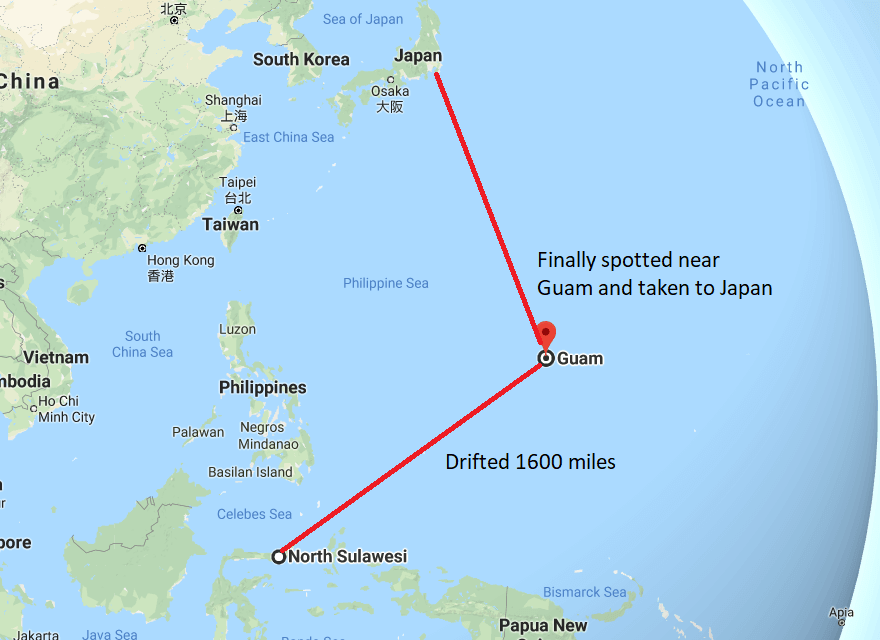 The rescue was made more perilous by high waves and members of the ship’s crew had to throw a rope to help him as the ship circled his tiny rompong. In desperation, Aldi jumped into the water to reach it and was eventually pulled to safety.

Safely on board, he was given food, clothes and cut his hair as they sailed to Japan, where he was picked up by Indonesian Consulate staff, who then arranged for him to be flown home.

Mr Adilang flew back to Indonesia from Japan on September 9 and is now back home and reunited with his family. He reports to be in good health and overjoyed to see his parents again after all those days lost at sea – something he did not believe would be possible as he floated around in the middle of the ocean, fearing for his life.

Although his journey had a happy ending and Aldi is now safe, his story highlights the perils faced by many people living in poverty who have to risk their lives on a daily basis as they try to provide for their families.